From Pennsylvania To New Lands

Welcome to Part 1 of a 3 part segment dedicated to “The Great Wagon Road”. This road played a vital part with many of our ancestors traveling southward and westward to new lands and opportunities. The road originally began in Philadelphia, Pennsylvania and followed The Great Warriors Path which was an Indian trail that many different tribes used. If your ancestor left from Philadelphia, they probably started from 248 Market Street. This was the origin point for most of the mail carriers that began as early as 1750. They would travel 63 miles to reach Conestoga Creek and Lancaster, Pennsylvania.

From Lancaster, the road reached York and then Gettysburg. Present day US Highway 30 basically follows the same route that our ancestors used in the 18th century. The changing seasons allowed fair weather or stormy clouds, high rivers or low-lying creek beds. The taverns and inns along the way provided information on what the road had in store for the travelers. These early businesses advertised with signs displaying artwork to demonstrate their services. This was especially helpful to the travelers who were unable to read and write. Some well-known tavern keepers were Casper Fahnestock, Evan Watkins, Thomas Harrison and Valentin Sevier.

From Gettysburg, the wagons headed towards the Potomac River, present day US Highway 11 crosses the river almost exactly where Watkins Ferry crossed in the 18th century. During the years of 1744 through 1770, the ferry was operated from dawn to dusk poling the large boat ferry back and forth across the river. The “boat” grew larger with each year and could easily transport several wagons as well as horses and cattle. When we think of The Great Wagon Road, we must also remember that this road was also used as a route for farmers to get their livestock and goods to market for sale. So, several of our ancestors would be met with huge herds of cattle, sheep, pigs, etc. Many of our ancestors would have a cow attached to the wagon with a rope and it would not be out of the ordinary to find a pig or two as well. Chickens were stored in a pen and transported on the wagon. From Watkins Ferry, the road winds southward to Winchester, Virginia. Present day, Interstate 81 is very close to the original route. To reach Winchester, it would have taken approx. 3 weeks if the weather was fair. Phillip Bush’s Inn was famous and known to all of the travelers that passed through the area. Winchester was a small village and it was founded in 1744.

From Winchester, the route takes present day Interstate 81 and makes its way southward to Harrisonburg with the Shenandoah Mountains to the east. The road becomes very rough in this area during the 1740s up to the 1760s. The terrain is up and down and many travelers became weary due to sickness. Supplies are running out and the weight of their personal possessions are beginning to wear down on the travelers. The lucky ones have horses and could travel much quicker, 20 miles or more a day. Many had handmade carts and many simply walked with their possessions on their backs. This was a very long trip, taking months to complete and the weather, depending on the season, would make traveling much more difficult. When the travelers reached Staunton, Virginia, they all would have been aware of the Indian raids during the 1750s. Staunton was known as the Valley of Virginia and many German and Scottish settlers settled in this area from 1743 through the 1750s. A stone house was built with an underground passage that led to a spring. Many of these first settlers lost their lives during Indian raids. Captain Robert McKenzie visited the area in 1757 and found nothing  of the original settlement except for spears, broken tomahawks and ashes of burnt homes and huts. Indian attacks were frequent along the Wagon Road as it traveled through Virginia and into the Carolinas. Our ancestors often traveled in groups for protection. The Shawnee were very active in this area and the travelers would have been fully aware of this as they traveled through Staunton.

The above picture shows New River near Fort Chiswell, Virginia. This picture displays the terrain our ancestors were faced with in this area. From Staunton to Fort Chiswell is approx. 144 miles. During this portion of the trip, supplies could be purchased in Big Lick, today known as Roanoke.

After crossing the Roanoke River, travelers could take a new trail westward on the new Wilderness Road, or stay on the The Great Wagon Road into the piedmont area of North Carolina. This marks the end of segment 1 of our 3 part series. The next blog will focus on the entry of North Carolina by our ancestors on this historic route. Below portrays a list of supplies that would have been packed on the wagons.

Water would have been collected along the way and stored in a barrel. All of these items, depending on the quantity, would have been added weight on the wagon or cart. Their personal items may have included tools such as an axe, hatchet, shovel, hammer, animal traps and rope. They would also have household items such as butter churn, butter mold, candles, cooking utensils, dishes, coffee grinder, bedding, clothing, lantern and personal items such as Family Bible, books, doll, rifle and pistol. 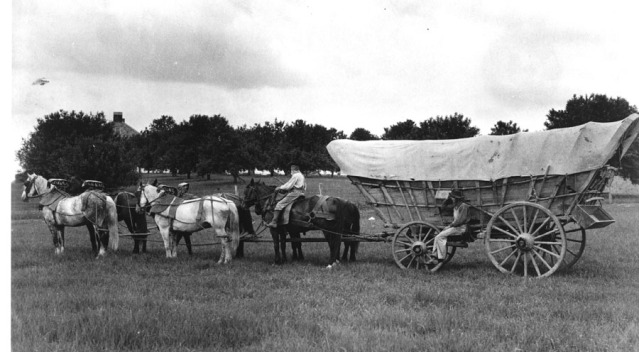 The next segment will cover North Carolina and the piedmont settlement. Please share your comments and your knowledge of The Great Wagon Road.

Learn More About Footstep Tracking and how You can trace the footsteps of your ancestors One Step At A Time !!

Enjoy your Journey To The Past !!

Sneak-A-Peek At New Arrivals For This Month !!

Enjoy Your Journey To The Past