The Regulators of The Western Piedmont North Carolina

Who were “The Regulators” and what is their place in our history? This segment will focus on the actions of the group known as the Regulators during the years of 1765-1768. The beginning of the Regulators date to 1765 and an address delivered by George Sims. The address was simply titled as “An Address To The People of Granville County” and it gave explicit details on abuse felt by Sims and other citizens of the area. The speech was delivered in a mild manner, a controlled voice with recognition and hope of a promise for justice and freedom.

Sims dedicated the address to Thomas Person on June 6, 1765 at the spring session of the Granville County Court. Sims proclaimed the misuse of seized lands by legal authorities which were later sold for far less their current worth. He went on to express a dire need for reform against the high cost of legal fees, taxes and the illegal actions of certain county individuals who were sworn to uphold the law and protect the citizens from abuse and harm. Sims did not stop there, he went on to proclaim the illegal activities of Samuel Benson and other accounting frauds. The ending of the address proclaimed loyalty to the King and the government. Sims regarded his hope in the government to correct these actions with a proper solution and trusted this to place in a timely manner. He reminded his neighbors to remain calm and act appropriately while the issues were handled correctly by the proper authorities. As to the reasons why George Sims decided to give the address, it’s merely speculative, but highly probable that Person and Sims were fully aware of detailed illegal activities of the county officials and their impact on the community as a whole. It is also highly suggested that they stepped forward and vowed to request change and justice in a peaceable manner. Thus, addressing the court openly and publicly.

Let’s take a closer look at these two men of Granville County.  Born 1733 in Surry County, Virginia, Person spent his childhood years on his father’s plantation. He married his cousin, Johanna Philpot and the couple did not have any surviving children. The above photo displays the home of Thomas Person in Granville County. He named the plantation, Goshen and lived on the property until his death in 1800. Thomas Person was known as a land surveyor during the time of George Sims’ address. Person was admired by neighbors and friends as honest and trustworthy. He was also acting sheriff, during the spring of 1765 and remained in political active service for over thirty years. Person would fight during the American Revolutionary War and on May 4, 1776, he was commissioned as Brigadier General. He was known as a massive and successful recruiter which enabled the rapid growth of both the Regulators, prior to the war, and the local militia during the war. Person was also known for getting crucial supplies to troops by using creative techniques. Person County, NC is named in honor of his life and in his later years, he supported the University of North Carolina located in Chapel Hill. He granted them one thousand silver dollars in order to complete their chapel which honors his name today. Person maintained his plantation, Goshen, in Granville County and owned over thirty slaves. By the time of his death, he owned a vast amount of land in North Carolina and Tennessee. George Sims was a schoolteacher and arrived in the area with his brothers prior to 1750. Sims was known as an avid reader and shared his political opinions and views with excitement among his friends and neighbors. Sims encouraged his comrades to be aware of taxes, fees, bartering, etc. Sims was known to quickly spread the news about any illegal fees, land confiscation, political propaganda and much more. He especially disliked the court of clerk, Samuel Benton, whom Sims proclaimed was a criminal prior to the position for the court of Granville County.

By August of 1765, Sims was arrested and sued by Samuel Benton for slander. Five years later, Sims had not received a trial, therefore a verdict was not reached as well. Sims did not join the efforts of the American Revolutionary War and he moved from Granville County to live the remainder of his days in Caswell County. He was well-known by many but it seems that he lived a moderate peaceful life as a constable and landowner until his death in 1808. While Sims was held prisoner in Hillsborough, news about his address flowed through the Piedmont countryside. Presbyterians were discouraging any conversations about the speech and reminding their members that charges of treason could be their outcome if they continued their attention to the matter. Other churches such as the Baptist were discussing the illegal activities of the court systems openly during services. Many preachers were encouraging their congregation to stand up for the principles against taxation and other activities carried out by the local authorities.

Churches were one of the gathering places qualified to speak to citizens in large numbers at once. Taverns and ordinaries were other places known for speaking out against Governor Tryon and his troops. Tryon visited the Piedmont area frequently displaying his huge numbers of armed uniformed men. The sounds and presence of Tryon and his troops marching through the countryside would have made a remarkable statement of authority, fear and control among the settlers. Tryon’s visits to Salisbury, Hillsborough and Bethania with his troops following the speech of Sims were numerous. The address was so well known as time went by, that people named it the Nutbush Address. This was in recognizing the home location of Sims. Herman Husband was quoting certain sections of the speech while he was organizing the Sandy Creek Association in Orange County. This particular association was arranging a meeting with local officials to discuss their grievances during the summer of 1766. Husband was concerned about Edmund Fanning, register of deeds, judge of the superior court and colonel of the Orange County militia. The Sandy Creek Association published several petitions and finally a meeting was scheduled for October of 1766. Fanning declined to attend and proclaimed the Sandy Creek Association as an insurrection.

Soon after the failed meeting, a new tax was placed on the settlers to finance an official residence for Governor Tryon. This action gave way to the newly formed Regulators and their numbers quickly grew throughout the entire Piedmont area of North Carolina. The year of 1767 was filled with new members, organizing efforts and planning new petitions. By January of 1768, several advertisements were published stating that the Regulator members would refuse to pay their taxes until they were satisfied according to law. Early spring of 1768, Sheriff Hawkins of Orange County seized a mare in lieu of taxes. News of the seized mare quickly traveled all throughout the area until a crowd of over 100 protestors overtook Hawkins before he could return to Hillsborough with the mare. The Regulators seized the sheriff, tied him up and carried him to Hillsborough. The sheriff was paraded through the community and a few Regulator members later fired three shots through the home of sheriff Edmund Fanning. All of the Regulator members held the mindset that they were proving the illegal activities of the acting sheriff openly among everyone. They proclaimed against violence and stated later that the three shots fired at Fanning’s home was one shot from Fanning himself and the two remaining shots were from Regulator members protecting their lives. They expected authority to react in a traditional, authoritarian paternalist manner: to officially deplore the violence on one hand and to move to fix the problem on the other. Unfortunatley, the outcome was quite different. Although Husband was sure that Thomas Lloyd, justice of the peace, originally supported the Regulator’s petition, the county officers now had no interest in listening or supporting the claim at all. All Regulator members were arrested. Fanning recruited more members for the local militia in order to uphold law and order.

The Regulators continued to grow rapidly and by April of 1768, a vast amount of members entered the court of Anson County and Justice Samuel Spencer. A debate occurred and eventually the Regulators assumed control over the court proceedings. New officers were appointed among themselves and they discussed topics of burning the courthouse and the jail. They voted against these actions and all agreed to resist the collection of taxes. Court was adjourned and the Regulators all left quietly. Judge Spencer stated that he did not feel threatened for his life and was quoted, “they offered no direct insult to me.” When Spencer submitted his report on the incident to Governor Tryon, he stated that the Anson “mob” swore loyalty to Great Britain and a willingness to pay reasonable taxes.

Meanwhile, Edmund Fanning carried through his promise of reinforced militia in Orange County and captured Herman Husband and William Butler. They were marched to Hillsborough in the middle of the night and held in the jail. By dawn, news had spread so quickly that nearly seven hundred men were stationed all around Hillsborough. Fanning was in a deep panic and quickly allowed Husband and Butler to make bail. Fanning was forced to meet with the Regulators and he promised to hear their grievances and offered alcohol as an incentive of his promise. The Regulators agreed and left the town as quickly as they arrived. This was the beginning of correspondence with Governor Tryon and the Regulators. Fanning initiated the communication lines and informed Tryon of the details pertaining to the Regulators. Letters were sent back and forth with Tryon expressing his concern with violence but less concern of illegal actions performed by county officials. By summer’s end of 1768, Orange County officials chose to raise their already illegal fees and Husband was quoted stating, “all hopes of the law have now vanished”. 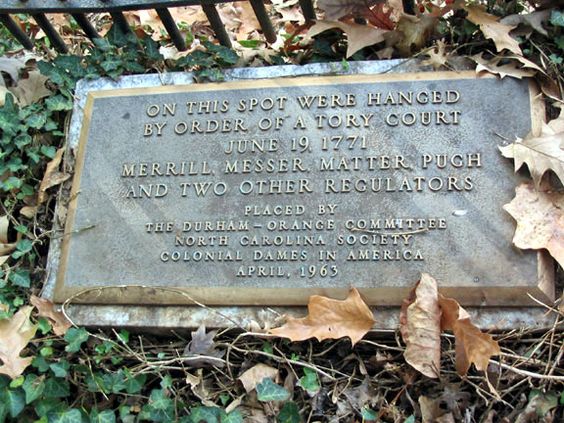 This ends segment 1 of this series. You will not want to miss the next segment which will provide the details leading up to the American Revolutionary War. Years of 1769-1771 were filled with more court proceedings, riots and death. Do you suspect your ancestor was a member of the Regulators? Let us know by commenting on this article and contacting us. Researching these early records can take you on an amazing journey. The lives of these early settlers deserve to be remembered and preserved for the next generation. Piedmont Trails wishes you all great success with your research. Enjoy Your Journey To The Past !!