Genealogy is the Sunshine on a Cloudy Day

Genealogy #Off The Grid

Majority of you may not know me, so let me take this moment and introduce myself. My name is Carol and I became involved with genealogy while preparing a school book report for my 7th grade English class. Mrs. Tatum required a family tree from everyone consisting of 3 generations. I was intrigued by the information I had gathered and filled my report to the appearance of a small novel. I received an A+ for my efforts and the journey of the past began. Over thirty-five years later, I still have the book report and gaze upon occasionally whenever I feel frustrated with my research. It brings happy memories to me of long ago conversations. One particular story comes to mind of Daddy demonstrating the fall my great grandfather took off of a stubborn mule named, Horse. Another memory of my grandmother racing me around the woodpile. Can you believe she beat me?Ah, good times, indeed. I believe everyone’s genealogy research has a humble beginning. An atmosphere surrounded by family chatter and the aunt or uncle who knows everything, yet knows nothing at all. Substance of a family, the names, the personalities, the events that shaped our lives also shaped our genealogy. Personally, I believe that genealogy defines life. What we made of it, what we lacked. How we did it, what we lost, what we had. Welcome to my journey, a path filled with exciting stories, unexpected treasures and a passion that can never reach it’s fill. So much of our research is comprised of techniques outside of the traditional sorting of records and online search. So, join me as I share my personal experiences with you. It’s simply called, Genealogy #Off The Grid.

When I created Piedmont Trails several years ago, I had every intention of sharing my personal journey as well. The growth of Piedmont Trails totally shocked me and I became overwhelmed with so many projects, meetings, etc. Once I was able to catch up and take a breath, I searched for that old book report and I quickly sat down and thought of my grandparents. I had myself a good laugh and picked up right where I left off, creating this blog. The truth is genealogists simply don’t have the time to slow down for very long. We have too much to do. Right? But, we’ve got to enjoy ourselves as we carry through on the trail. So, pull up a chair, grab your glasses if you need to and let’s travel back to a cold autumn day long ago when I made the discovery of a lifetime, or so I thought at the time.

Growing up, everyone called me a “tomboy” because I would rather stay outside, run and play simple games like tag and climbing trees. One of the favorite things I enjoyed was fishing. I think I’m between 8 or 9 years old in the photo above. I can tell that I’m enjoying some serious fishing with Daddy. I’m sitting on a white towel, thanks to Mama, her girls couldn’t be dirty at all. Being proclaimed as a “tomboy”, I tended to venture off at times and explore on my own. My family purchased a wood stove when I was 12 and my sister was 8. It took the effort of everyone to cut the wood, load it on the truck, unload and stack it for the winter. One day while we were cutting wood on Grandpa’s land, my sister, Sharon, and I scurried through the woods while Daddy cut down a few trees. Sharon is 4 years younger than I and since we had no brothers, it was up to us to help our parents with the wood. Daddy would honk the horn on his old truck when he was ready for us to help load the wood. In the meantime, my sister and I had time to play and explore. We crossed the creek and up the next steep hill and I spotted something in the distance. I couldn’t make out what it was, but I was going to find out.

We crept through the thickets and finally came to a log structure. It looked like it had burned down a long time ago. The roof was gone and the entire back wall was in shambles. The backside faced a small creek and a spring that I knew nothing about. On the other side, a door frame was still in place and I walked through the opening. The leaves were thick as I stood in the center of the one room cabin. I could just picture a family living there and cooking over the fireplace just like Grandpa and Grandma told me their grandparents used to do. I began raking through the leaves and I found old glass jugs half buried in the ground. Some were broken and some of them were filled with something and I tried to take the lid off but was unable to. I shook them and it was liquid inside as it gushed one way and the next. What is this, I thought. Why is it way out here? Why hasn’t Grandma told me about his place?

HONK HONK HONK !! I grabbed my sister’s hand and told her to run like lightning. Off we went through the woods towards the sound of Daddy’s truck. As we got closer, I told Sharon to keep the cabin a secret for now and not to tell anyone until we figured out what the story was behind it. She agreed, although I didn’t really trust her to keep quiet. I was hoping that Daddy would need wood again really soon. In the meantime, I was going to fish for some answers about the cabin.

I love to fish and at this point, I was fishing for pieces of the past !!

All during the following week, I would ask Mama certain questions about Grandpa’s land. Grandpa had died a few years before and I told Mama I wanted to know more about the land and how Grandpa farmed it. I was beating around the bush until I just about stomped a ditch around it and still had nothing on the cabin or those mysterious jugs. The following Saturday, Daddy drove us all out to Grandpa’s land and the humming of the chainsaw began again. Sharon and I made our plans during the week and we were going to look around the cabin grounds for signs of clues; anything that might shed some light on the mystery.

We brushed away all of the leaves inside of the cabin and found a few old tools, part of a table and some flat wood pieces that I thought were shelves at one time. Then in the corner, I found parts of an old calendar!! MA? March or May, what year? As I brushed the dirt off, I read 1939. Wow, this is really old, I thought. So, the fire must have happened after 1939. My grandparents married in 1936 and lived in a house located nearly a 1/2 mile from where the cabin stood. They built the house during the spring before their wedding and they always lived in that spot.

Now, with a date and a few more clues it was onto part two of our plan. During the past week, I asked Daddy how to take lids off of stubborn jars and he said a nice trick was to hit the lid against something hard, like a piece of wood or the edge of a countertop. So, I took one of those jars and hit the lid against a big rock several times. I grabbed the lid, twisted it and I was able to get it off. The smell was overwhelming and Sharon nearly threw up from the scent. What is this stuff? Honk Honk !! I grabbed one of the jugs and Sharon grabbed the calendar pieces and a few of the tools. We started back to Daddy’s truck.

As we walked through the woods, it dawned on me that these jugs probably had whiskey in them and I commented this to Sharon. Daddy met us as we approached the truck. “What do you girls have now?”, he said. Daddy took the jug and opened it. “Hmm, that’s some good stuff”, he said. He turned to Mama and said, “I’ve never known your Daddy to drink.” My mouth fell open with shock and excitement. Mama asked us where we found the jug and I told her about the cabin and showed her the tools and part of the calendar. Whoa !! What a minute !! Grandpa made moonshine whiskey and I can’t wait to write this down in my diary, I thought. I remember that feeling to this day. It’s a feeling that can’t be described with words.

As it turned out, Grandpa didn’t make the moonshine, he bought it from a friend of his and he was known to keep a jug at the barn from time to time. I guess the cabin was used when Grandpa planted the upper fields on the backside of his property. As far as the cabin, it was there when my great-great grandfather first purchased the land in 1886. Lightning hit a tree during a summer storm and it caught the cabin on fire. This happened before Mama was born which confirms the date on the calendar I found. The photo above is my Grandpa and Grandma during 1954. The glass jugs were made of amber glass with metal screw on lids. All of them were one gallon in size. I later determined that the glass jugs were made during the same time period of the above photo. Needless to say, I never tried the moonshine from the old jug, but after Daddy poured it out, he let me keep it as a keepsake.

Curiosity is a natural aspect of a genealogist. We are intrigued by the unknown past and it thrills us to make a new discovery. Details and more details are what we crave. These traits have not changed within me since I stumbled across the remnants of that old cabin back in the late seventies. I’m sure you all have stories such as this that you remember. It stands to reason why family history is so important, doesn’t it?

As you research your family tree, don’t forget what got you hooked in the first place. When the answers don’t reveal themselves or you become overwhelmed with your projects, take a break and reminisce. Remember your humble beginnings and pickup your journey when you’re ready. There is nothing that compares to a good laugh, a good story and a discovery of a lifetime.

Naming Patterns Can Reveal Surnames of Women From The Past 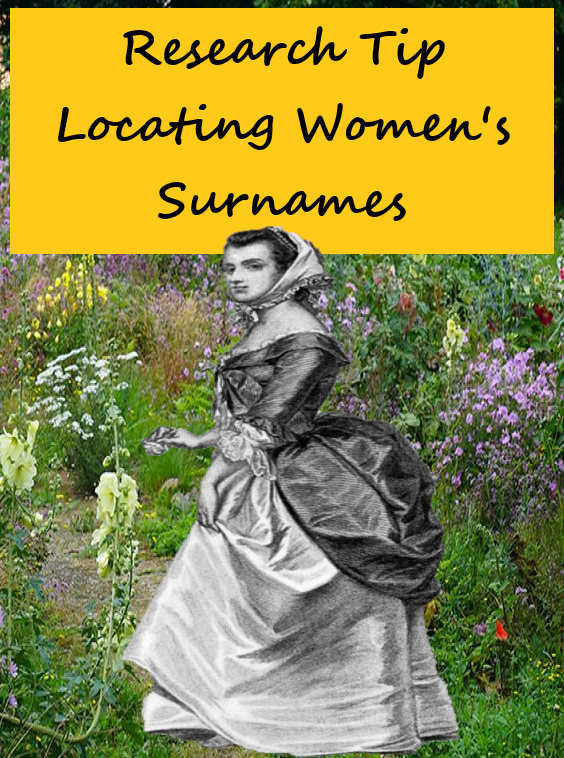 Recipes of Long Ago