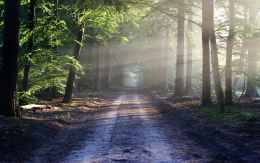 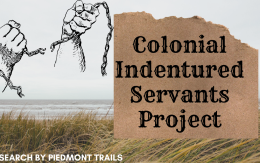 This project has been open for research during the past two years. Piedmont Trails has embarked on the journey of thousands of indentured servants. The majority of these people arrived in America during the 17th-century and continued until the mid-18th-century. Many were families who became separated for the remainder of their lives. Others, clearly seeking freedom in a new land, faced sickness and harsh treatments from their new masters. This intriguing project begins with early documentation in the colonies of Virginia and Maryland. It is within these areas that reveal the overwhelming numbers of indentured people. Documents prove the involvement of Great Britain, allowing the unusual tactics, logbooks, and soaring profits to stand as witnesses. This project hopes to share the voices of the indentured and the truth to be recognized.

The past two years have revealed a significant amount of data. Over the next few months, Piedmont Trails will begin sharing portions of these discoveries here. If you suspect your ancestor was a colonial indentured servant, let us hear from you. Show your support for the project by subscribing to Piedmont Trails. It’s free, and your actions prove that you care about our research and our work. Thanks for visiting the project. Be sure to visit our other project pages, such as the Great Wagon Road project. Enjoy Your Journey To The Past !!

Current Proven Names from the Project

The listed names are individuals who served as indentured servants during the colonial period. These individuals contain documents and various other materials from the research conducted by the project since 2020. Beginning in February of 2022, the project will begin to share a listing of names associated with each colony. As time progresses, new names will appear on the list with added details such as dates, ship arrival, owner information, court & parish records, etc.

6/26/22-The project located several pages consisting of colonial indentured servants without any type of contract attached to them. As we continue to research the full details of these individuals, any person who does not have a contract filed for them will appear in the list with additional notes.